Rumours abound regarding snow conditions in any resort. Whatever it is that you are worried about we'd like to reassure you that Meribel has an excellent reputation for great snow conditions from early December right up until the end of the season.

Think of the April showers that we are so accustomed to; in the Alps these fall as snow, often resulting in bumper snowfalls in late March and April. In fact, some of our lucky guests have had one of the best powder days they've ever experienced during April. 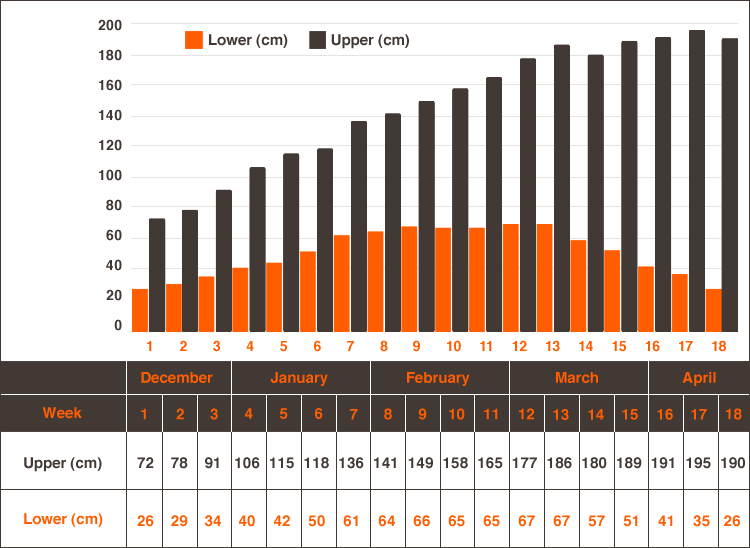 Data provided by the Ski Club of Great Britain.

The graph above shows the average snowfall during the season, taken over the last 10 years. A Ski Basics season runs from Week 1 until Week 18. A solid base of approx. 75cm is created by Meribel's prolific covering of snow cannons in November/December as the season starts. Then, as you can see, snow simply accumulates during the season eventually resulting in nearly 2m of snowfall on the upper slopes in the last week of March/ first week of April.

The best times to ski in Meribel

Pre-Christmas – Premier Neige
Make the first fresh tacks of the season...Take advantage of cheap lift passes and empty slopes before the Christmas rush.

Christmas / New Year
Have an extra-special holiday with family or friends in a magical winter wonderland.

April
Experience the spring snow and enjoy lunch or après-ski on one of the Three Valleys' many sun terraces.

Average of 200cm snowfall on upper slopes between January and March

Average of 75cm snowfall on lower slopes in late March/April

Great chalet, hosts and service in general. The name Ski Basics doesn't do you justice; you are very far above basics! We will be back.